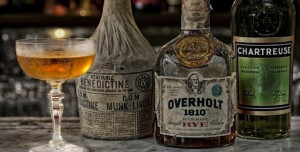 “…I was standing at the Criterion Bar, when someone tapped me on the shoulder, and turning round I recognized young Stamford, who had been a dresser under me at Bart’s.” Dr. J. H. Watson, A Study in Scarlet

“There were several bartenders in their shirt sleeves, hard at work mixing drinks for the loungers who fringed the broad, brass-trimmed counter.” The Valley of Fear

Cocktails, in the modern sense, first appeared in the 1800’s. Recent versions are usually sweet, fairly high in alcohol, and served chilled.  Early examples of mixed drinks were often drunk hot and were meant to be sipped during friendly chats or when one was in a reflective mood. What follows are some of the potions that were available to Mr. Holmes and his faithful companion.

“I lent the ostlers a hand in rubbing down their horses, and received in exchange twopence, a glass of half and half, two fills of shag tobacco, and as much information as I could desire about Miss Adler, to say nothing of half a dozen other people in the neighbourhood in whom I was not in the least interested, but whose biographies I was compelled to listen to.” Sherlock Holmes, A Scandal in Bohemia

A FOUR OF GIN HOT

“I was a-strollin’ down thinkin’ between ourselves how uncommon handy a four of gin hot would be…” Officer Rance, A Study in Scarlet

From about 1820 to the turn of the century one of the main ways of drinking gin was with hot water. “A four” is possibly an abbreviation of the colourful bar-measure “four fingers” or it may be a reference to the measure, “four penn’orth”.

“There he sat on his veranda, drinking whiskey-pegs and smoking cheroots, while the country was in blaze about him.” Jonathan Small, The Sign of Four

To keep late Anglo-Saxon citizenry on the straight and narrow, King Edgar ordered that pegs be fastened in drinking vessels at given intervals; anyone who drank beyond these marks at one draught was liable to punishment. Meant as a deterrent, they became a provocation. Peg-tankards contained two quarts, and were divided into eight draughts. They inspired such expressions as “to take him down a peg” and “to put a peg (nail) in one’s coffin”. In popular parlance any drink of spirits became known as a peg.

Anglo-Indian in origin, a chota peg is a slang term for a drink of a spirits (usually brandy or whisky) and soda water, which one drinks in the early evening on the veranda while wearing one’s solar topi (pith helmet).

An old army recipe
1 bottle of good claret
1 bottle of champagne “brut”
½ pint soda-water
½ pint brandy
½ bottle orange Curacao
Chill all the ingredients well before mixing. Mix just before serving. This old army recipe also suggests that “a tankard of porter may be added to give more body.”

“Hungerford Park is an excellent beverage, and is especially suitable for shooting parties in hot weather,” according to John Bickerdyke, writing in 1889.
3 good-flavoured apples
1 lemon
3 bottles of ginger-beer
½ pint of sherry
2 1/4 pints of draught ale
loaf sugar
grated nutmeg
Cut the apples into slices. Put them into a jug; add the peel and juice of one lemon, a very little grated nutmeg, the ginger-beer, sherry and ale. Sweeten to taste, stir a little to melt the sugar. Serve well chilled.

Invented by James Pimm in 1841, Pimm’s Cup was commercially marketed in the 1870’s.
Pimm’s may be diluted with ginger ale or fizzy lemonade (Sprite may well be the closest American equivalent). Pimm’s is traditionally garnished with cucumber sticks, orange slices and sprigs of borage or mint.

1 bottle ale
1 bottle porter
1 glass brandy
1 tablespoon ginger syrup
2 tablespoons sugar
Mix all the ingredients together then grate half a nutmeg into it. Put the concoction into the refrigerator for at least half an hour before serving. Just before serving stir a teaspoonful of bicarbonate of soda into it.

(Professor George Saintsbury, a wine fancier of great experience and firm opinions, lamented in 1920 that “modern sherries of the drier and less full-bodied kind make negus impossible; with a full golden or brown you may make a fair alternative to the port mixture.)
Put into a tumbler:
1 wineglass of port wine
1 teaspoon of sugar
grate in a little nutmeg and lemon peel
add sufficient hot water to make the tumbler one-third full.

“I made it myself in my own rooms [at Oxford], for joint consumption with a friend, who, as a matter of fact, actually did become a bishop later,” confides Professor Saintsbury. “The flames will be of an imposingly infernal colour, quite different from the light blue flicker of spirits or of claret mulled. Before it has burned too long pour it into a bowl, and drink it as hot as you like. It is an excellent liquor, and I have found it quite popular with the ladies.”
1 bottle of port
½ orange
cloves and sugar
Pour the port into a saucepan, add as much water as you think fit.
Then add half an orange, plenty of cloves, and sugar to taste.
Heat until it begins to steam, then light it, pour into a bowl and drink as hot as you like.

A warm drink based on gruel  mixed with ale or wine to which spices, sugar or honey were added, caudles were commonly given to sick people and especially to women in childbed.
4 ounces prepared groats or oatmeal
½ pint cold ale
1 quart ale or beer
allspice
cinnamon
1 wineglass any spirit
sugar to taste
Mix the groats or oatmeal with the half pint of cold ale.
Pour this into a saucepan containing a quart of boiling ale, or beer.
Add a few whole allspice, and a little cinnamon.
Stir the caudle over a low heat for about half an hour, and then strain it into a basin or jug.
Add a glass of any kind of spirits and sugar.

Described as a “policeman’s drink when on duty on cold nights.”
1 tablespoon brown sugar
1 pint warmed beer or Guinness
1 shot of gin
Mix ingredients, garnish with nutmeg, and drink warm.

Sugar, lemon, ale and eggs…
1 quart strong ale
2 lumps of sugar
lemon rind
cinnamon
1 glass cold ale
6-8 eggs
powdered sugar
grated nutmeg
Place the strong ale in a saucepan with the lumps of sugar which have been rubbed with lemon rind and cinnamon. Take the mixture off the fire when boiling and add one glass of cold ale.
In a jug, beat the yolks of six or eight eggs with powdered sugar and grated nutmeg.
Pour the hot ale from the saucepan on to the eggs, stirring them whilst so doing.
Have another jug at hand and pour the mixture as swiftly as possible from one vessel to the other until a white froth appears.
One or two wine glasses of gin or rum are often added.

“Sherry cobbler is indeed a most excellent drink,’ writes Professor Saintsbury, “I was taught to make it as an undergraduate.” Cedric Dickens suggests that a tablespoon of port be added. It “gives the whole a thrilling and inviting appearance,” says he.
Put into a large tumbler:
1 tablespoon of sugar
2 or 3 slices of orange
2 wineglasses of sherry
Fill the glass with shaved ice and serve with a straw.
As an extra ornament add a few berries in season.

Beer & brandy
1 pint of beer
1 tablespoon brandy
1 teaspoon brown sugar
Mix all ingredients together and garnish with a little grated nutmeg or ginger, and a sliver of very thinly-cut lemon peel.

Note: The jigger measure in the days these recipes were developed was 2 ounces. It has shrunk to 1½  ounce in modern times. A pony is 1 fluid ounce. A wineglass is a shade more than 2 fluid ounces. A dash is 1/3 teaspoon.

1 wineglass of brandy
½ tablespoon of sugar
several slices of dried peach
Pour the brandy and the sugar into a saucer and set fire to them.
When the flame has extinguished pour the liquid into a small bar glass containing the dried peach slices.

½ tablespoon of sugar
1 tablespoon of water
2 sprigs of mint
1 slice of orange
1 wineglass of brandy, whisky or gin
Mix ingredients and serve in a small bar glass two-thirds filled with shaved ice.

1 measure of scotch
3 dashes Angostura bitters
1 sugar cube
Stir the ingredients together well in a tumbler until the sugar dissolves completely and then add two or three cubes of ice which should be just covered with liquor.

(Could this have been a tribute to Mrs. Godfrey Norton?)
Fill a small bar tumbler with cider and add
1 teaspoon sugar
1 teaspoon cocktail bitters
Decorate with a piece of lemon peel.

Place a sugar lump in the bottom of a champagne coupe and shake on 2 dashes of Angostura bitters.
Add equal (small) parts of:
brandy
Curacao
maraschino
Grand Marnier
Fill the glass with champagne.

Place sugar lump into the bottom of a champagne flute and shake on 2 dashes of Angostura bitters. Add 1 measure of brandy
Fill with champagne.
Decorated with a slice of orange, if desired

The JOHN COLLINS, named for a 19th century London barman, was made with “Holland Gin”. The TOM COLLINS was made with “Old Tom”, a sweet London gin.
1 measure of gin
Juice of 1 lemon
1 teaspoon sugar
1 dash Angostura bitters
Soda
Place all the ingredients except the soda into a highball glass and mix.
Add two or three ice cubes and then top up with soda.
Decorate with a slice of lemon.

This is the precursor of the Martini. Some say is was invented in San Franciso by the famous barman, Dr. Jerry Thomas at around the time Mr. Francis Hay Moulton and his lovely fiancée, Miss Hattie Doran, were in town. Others say it is an English invention, named for the Martini rifle used in India.
In a small bar glass, add:
1 dash of bitters
2 dashes of maraschino
1 wineglass of sweet Italian vermouth
2 small lumps of ice
1 ounce of Old Tom gin (a sweet gin)
Shake up thoroughly and strain into a large cocktail glass.
Put a quarter of a slice of lemon in the glass, and serve.
If the guest prefers it very sweet, add two dashes of gum syrup.

HAIR OF THE DOG